So today is kind of a day off for me. Hope is on Fall Break. Usually on Mondays, Wednesdays and Fridays, I get up and am out of the house by 8:15. I enjoy the morning walk.

Eileen’s family is in a sort of crisis mode. She took the day off and is already gone to support her sister, Nancy.

Yesterday did not work as planned. The Hospice people were a no show. The family was expecting them to come and possibly medicate Aunt Vera enough to calm her down and move her to hospice. This didn’t happen. Instead they received a request that Aunt Vera have a chest xray and maybe even other procedures before they could admit her.

Nancy decided not to attempt to move Aunt Vera to do all that since she is really at death’s door and entirely uncooperative at this stage.

She could even have already died as I write this. I talked to Nancy on the phone yesterday and she said that she was just going to keep her where she was.

This kind of thing takes a toll on us old people as we have to take care of even older people whom we love. I had a lot of help with my father’s death and my mother’s breakdown, but it still was difficult.

I was going to type some reading notes on Albert Borgmann’s Power Failure: Christianity in the Culture of Technology this morning but I ran out of time. Sometimes I type in my reading notes and then use them (hopefully sparingly) here in my blog. I wanted to talk about Borgmann’s ideas a little bit this morning. So I guess I’ll just touch briefly on it.

Borgmann is working toward an ethical-philosophical critique of the impact of technology on our lives.

He sees two kinds of things or realities.

“The first constitutes globally ‘a universe that speaks to humans.’ Locally it comes to the fore in any object that conveys ‘meaning through its own inherent qualities’ and’the active contribution of the thing itself to the meaning process.’ It is a kind of reality, however, that the authors [he is quoting from] find to be rarely acknowledged in their extensive interviews.”

Let me stop here and say that he is talking about concrete things, things that he classifies as “commanding realities.” Lest this sound too obscure, he talks about music and compares musical instruments as examples of commanding realities

to listening devices such as CD players or stereos which are examples of “disposable” things or reality.

He is drawing from the work of Mihaly Csikszentmihalyi and Eugene Rochberg-Halton. 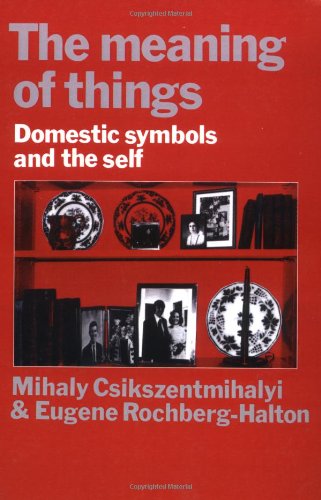 I think that Mihaly Csikszentmihalyi is also the author of the book, Flow, which I have dabbled in a bit. I couldn’t quickly find an online connection between these two books, but how many people have the name Mihaly Csikszentmihalyi and publish in related areas?

I know I didn’t put a definition of “disposable reality” here, but I think I will just close with a succinct little paragraph from Borgmann which sums it up well.

“In sum, material culture in the advanced industrial democracies spans a spectrum from commanding to disposable reality. The former reality calls forth a life of engagement that is oriented within the physical and social world. The latter induces a life of distraction that is isolated from the environment and from other people…”

Excellence vs. banality
deep vs. shallow
communal vs. individualist
celabratory vs. consumerist

Borgman offers the last few pairs of terms as markers toward further understanding not definitive comparisons.