Eileen and I spent time looking for my old Kindle yesterday in order to make the deadline for the update. I don’t really use it much. I prefer the Kindle app on my tablet. Eileen found the old Kindle. It took a while to recharge but I did get it updated. I randomly picked up Barbara Tuchman’s The March of Folly: from Troy to Vietnam recently. I was dutifully reading the acknowledgements when I ran across her thank you to Jeffrey Race “for introducing me to the concept concealed under the jargon, ‘Cognitive Dissonance.'”

I was intrigued. I have thought of “cognitive dissonance” as the distress which ensues from contradictory statements or evidence. After reading what Tuchman has to say, I think I had it wrong.

Tuchman writes: “Psychologists call the process of screening out discordant information ‘cognitive dissonance…” Oh! It’s the act of screening, denying the contradiction. Boy did I have that wrong. Tuchman continues and says that cognitive dissonance is “an academic disguise for ‘don’t confuse me with the facts.'”

The entire book, The March of Folly, is an examination of countries actively working against self interest. This seems apropos to understanding America right now (not to mention other countries).

In a previous read, I noted  that Tuchman also introduced me to the  related concept, “wooden-headedness” which she defines as “assessing a situation in terms of preconceived fixed notions while ignoring or rejecting any contrary signs.” Both of these ideas are handy when trying to make sense of persistent wrong-headedness in our current world.

In addition to turning to Tuchman, I found myself perusing through Richard McChesney’s Rich Media, Poor Democracy: Communication Politics in Dubious Times.

On July 16, 2003 (judging from handouts tucked into my copy of this book) I gave a book talk on this book. So I guess I have read it all the way through. I have extensive notes in the back which is usually a sign that I have read extensively in a book.

I learned a lot of history from this book. I am interested in how McChesney is thinking about our current journalistic and political mess. I discovered that my library has a couple books by him sitting on the shelf. Planning to look at them today. 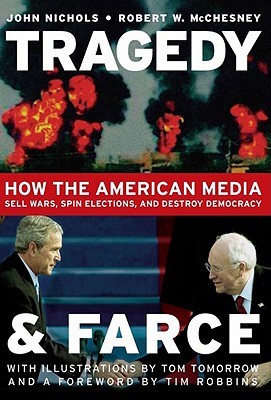 The second book above is actually on order at my library. I’m now on the reserved list for it.

I finished sketching a plan of choral pieces for the rest of the season yesterday. They include this piece.

I couldn’t get a copy of this piece to study, but it sounds like a good for us. I ordered it.

I can remember when he wrote and recorded them. I thought it was a clever idea to write one’s own etudes to improve one’s technique. But at the time I couldn’t get my hands on the score. But now it’s readily available. I ordered it too. Blowing the Roof Off the Twenty-First Century: Media, Politics, and the Struggle for Post-Capitalist Democracy

A review of a book McChesney published in October 2014. Unfortunately It’s not in my library system.

John Roberts Criticized Supreme Court Confirmation Process, Before There Was a Vacancy – The New York Times

Oops. Roberts did this just before Scalia died.

‘I Will Survive,’ Dirty Words Routine Added to US Registry – The New York Times