The free breakfast offered Thursday morning at our hotel was weirdly Western. Four half slices of dry toasted white bread served with rock hard butter in a small restaurant container. A symmetrically round sunny side up egg. Two slices of pale not quite ripe watermelon. The coffee was not bad which was surprising. But when I asked the young woman anxiously trying to wait on us if there was any steamed buns available she barely seemed to understand what I was asking for. 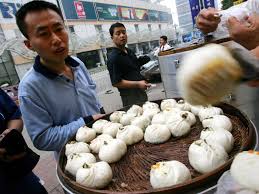 Later Eileen and Elizabeth went out to do some errands while I watched Alex. They purchased some of the very steamed buns I had in mind, some sweet with sweet bean paste stuffing some savory with some amazing local chive like greens, copious garlic and specks of egg.

It wasn’t too long before Jeremy and Sarah arrived. Sarah looked pretty exhausted from her flight and after a bit crawled off to do some badly needed resting in a bed at Jeremy’s and Elizabeth’s apartment.

For our meal together later, Eileen and Jeremy went to the market and purchased raw materials for an amazing little very Chinese feast that Jeremy whipped up on their return.

They purchased two kinds of Sichuan pepper so that I was able to experience the odd numbing sensation associated with the cuisine that uses this uniquely Chinese spice.

Elizabeth put rice in their rice cooker while they were gone.

Not too long afer the meal, Eileen very suddenly was tired so she and I walked back to our room. Sarah was getting a second wind so she remained behind at the apartment.
Later, she and Jeremy dropped by the motel room with sim cards for our phones so that they would work in China. Jeremy grimly told me that we should wipe our phones upon return to the States presumably due to Chinese surveillance practices.
They were riding around in jeremy’s cool three wheel motor scooter. They scooted back to the apartment for a while. Then returned late with cold noodles for Eileen, Sarah and me for later in our rooms

Sarah, Jeremy and i sat in the court yard while a man from the hotel played his er hu at the next table. His tone was amazing. His repertoire seemed to move between pentatonic Chinese folk songs to Scarbarough Fair. During one of the folk songs the chef could be heard joining in singing from the nearby kitchen.
Sarah ate her noodles. Jeremy drank his beer and the three of us chatted happily. Later the er hu player switched to violin and continued with melodies like the theme from Dvorak’s New World Symphony. After a while Jeremy scooted home.
Then Eileen groggily wandered out looking for me We were sitting in courtyard steps away from the door to our room. Sarah’s hotel room is next door to ours. So we inspected each other’s rooms after a brief chat before retiring.
The conversations yesterday were very satisfying and interesting. Jeremy loves to talk and is in the young Dad high moment of exhilaration. He is madly in love with Alex who gets passed from arms to arms of everyone very contentedly.

Jeremy recommended a writer to me and instantly uploaded a book on my Kindle by him for me: I am an Executioner by Rajesh Parameswaran.

Later after he left and before Eileen joined us Sarah gave me my birthday present. It was a signed copy of Neil Gaiman’s Graveworld No 1. The graphic novel edition by P. Craig Russell. I read some in both last night.

Right now it is 4:10 AM local time. I’m wrting this off line again in the hopes that I will get a window of VPN access to our spotty wifi here in the hotel. It’s 4:10 PM back in Michigan. The adjustment to the time changes like this gets rougher and rougher as I age. But I’m having a wonderful time for sure.