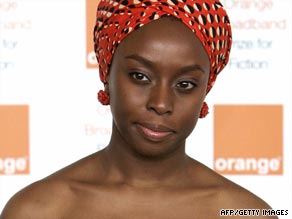 Adichie has just published her third novel, Americanah. I read an interview with her in a recent New York Times. Several of her comments intrigued me:

I do think there is a tendency in American fiction to celebrate work that fundamentally keeps people comfortable. There is also an obsession with “original” for the mere sake of it, as though original is automatically good, and original often involves some level of irony and gimmick.

The U.S. has been at war for many years now, and there is also an ongoing intense ideological war in the U.S., but you would hardly know that from American literature. But of course this is also about my own biases. I love fiction that has something to say and doesn’t “hide behind art,” novels that feel true, that are not self-conscious experiments. I read a lot of contemporary American fiction and find the writing admirable, but often it is about individuals caged in their individuality, it says nothing about American life, is more about style than it is about substance (style matters but I struggle to finish a novel that is all style and has nothing to say).

In her novel, Purple Hibiscus, one is keenly aware of the background of a country at war with itself (Nigeria). One also is drawn into the convincing and disturbing drama of the life of one family. Papa, Mama, brother Jaja and the narrator, young Kambila are a microcosm of struggle. Papa is a new kind of African Big Man. He is rich and publishes a newspaper critical of the government. But in his own home he is a source of terror for those he loves as well as someone the other three venerate.

Papa’s religion is the white man’s religion (Catholicism). He practices in a narrow and fanatical way. His strict and puritanial household is balanced by his distinctly different Aunty Ifeoma’s life. She is also Catholic but is a professor at a local college. She is raising her children alone and seems to be a widow. When Kambila and Jaja visit Aunty Ifeoma, they experience a much different life. But they are (in different ways) torn between these two worlds.

Despite the influence of the vastly more humane Aunty Ifeoma, Kambila persists in loving and seeking the approval of her stern and conflicted father. This blend and the clearly drawn portrait of dreaded Papa makes this novel an engaging and disturbing tale.

In the interview linked above, Adichie mentions several American writers she admires and presumably fall outside of her criticisms quoted above.

My next book is sitting on the floor by my chair and it is by one of these writers, Elizabeth Strout. I look forward to another interesting read.

(Regarding the story I wrote about the young  man in the elevator yesterday, I misremembered Eileen’s comments to him. She didn’t say we were lucky. She said we goofed off a lot. And she remembered the young man as responding that he knew how to goof off.)

1. The Other Side of the Story – NYTimes.com

What happens in an America with secret police and secret lists when someone is falsely accused? A nightmare.

3. These Children Are Our Future – NYTimes.com

Another clear indictment of how we are failing our children.

After Arming the Rebels, Then What? – NYTimes.com

8. Roasted Vegetable and Goat Cheese Pizza | One girl. One kitchen.

I consulted this recipe when I made food yesterday:

I didn’t follow the recipe quite. I did use Goat cheese on the one above, but  I baked the dough separately before adding roasted and fresh veggies. Eileen and I dropped by the Edgington’s yesterday with food. I made a more kid friendly version with cream cheese instead of goat cheese and the toppings I thought each kid would go for.

I thought I remembered that Esther liked black olives and Isaac raw  carrots. It seemed to work. I think it also helps when they recognize what they are being asked to eat.