Friday after stopping off at the bank I dropped into LemonJellos and had a chat with Matt Scott about his change in running live music. I was surprised to learn that he had a profitable five years of doing this. Also I was surprised and relieved that this run began after he started paying his musicians. He mentioned to me that I was influential in the process of deciding to do so. 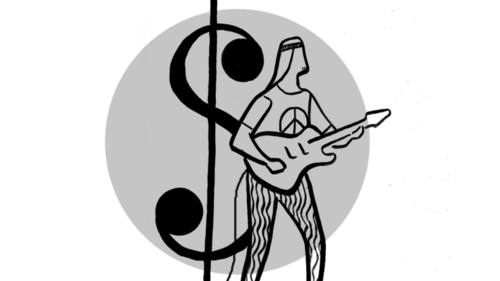 I told him that I could never understand how he afforded to pay his musicians. He said that he often did so out of his own pocket which is something I knew. I remember the last couple times I played there, I rented a piano. Matt offered to pay for it at the time but I wouldn’t let him. I’m glad I didn’t since he probably was paying for it out of his pocket. Better I should do so since there were cheaper ways to do the performance and I wanted a real piano for the Mendelssohn piano trio and my composition “Dead Man’s Pants.”

I tried to be supportive of Matt and shook his hand.

I continue to mull over what music is and how people get it into their lives and ears. I keep plugging away at David Byrne’s How Music Works.

Both Byrne and Matt Scott fascinate me with their orientation toward music as business and commodity. This morning as I was reading Byrne I learned that the change in MTV from a video channel to a reality TV channel was precipitated in part by record companies demanding fees for material they had previously provided for free. I remember MTV as very interesting in its first few years. Then completely losing interest in it. Each chapter begins with a transcription of a sermon by Adam One, the leader of the group, about the feast they are celebrating. Atwood creates a whole liturgical array of new saints: St. Euell (Gibbons), St. Rachel (Carson), St. Dian (Fossey), and more. The sermon is followed by a hymn Atwood has written. It’s great fun. These books don’t take themselves too seriously but at the same Atwood uses her grim witty humor to make some terrible points about how we live now. I started the final volume of this trilogy last night: MaddAddam.

Huff Post Entertainment – Required Reading: 10 Books We Read For Class That Will Change Your Life

I’m a sucker for book lists. On the list linked above, I found a couple of books that interested me.  Thomas McKenna recommended two books I had not read,

” [A] brilliant professor recommended I seek out Willa Cather’s A Lost Lady and Wallace Stegner’s The Big Rock Candy Mountain. They’re both Westerns, specifically stories set at the closing of an old era and the emphatic beginning of something newer, and more uncertain. The former is a small novella and the latter a big, sweeping opus of a novel, but both are extremely similar in the way they interrogate family responsibility, the myths of the frontier and the American Dream, coming of age, what it means to be a man, and how one registers loss. I found the Cather free online, but the Stegner was a hefty $11.99 on Amazon for the Kindle book. I have read both authors and enjoy their work. Yesterday when I was making my weekly library trip to get my Mom new books to read I checked the shelves and there was The Big Rock Candy Mountain sitting there. Cool beans. I started reading it also yesterday.