So Eileen bought the car. She talked them down a thousand or so dollars and got a pretty good price on it. She seems very pleased with it. Also a bit guilty. Heh.

I sat in the backyard last night waiting for her. It was lovely weather. I read my Sept AGO magazine. In it, there was an ad for a piece of music by Cameron Carpenter. 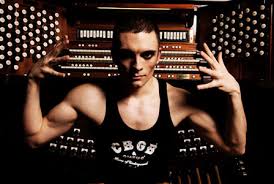 There are always young brilliant organists coming up.  I have noticed that this guy is trying to break some barriers. Admirable.

He has published his first composition.

I am going to order a copy. I especially like the ad copy when it says the performance notes on the piece “say simply: ‘No regisration; just dynamics and signs to observe or omit.”

Wow, pretty different from my email conversation with David Hurd when I asked him I could re-register a piece he had written.  This means use different sets of pipes than he asks for in the performance notes. The reason I asked him was each organ is different and my organ doesn’t have some of the stops he was asking for.

He asked me not to perform his piece.

I have a pull down folder marked INT NEWS (International News).

I regularly listen to the BBC online. For news I recommend the World Service (not in the picture above). For online cool stuff like dramatizations I  check BBC 7 & BBC 4. Good stuff.

I like the Guardian’s web site. This particular link is good because it’s one page with good brief synopses and pics on each story. One of the best online news pages for that reason. Much better than any US web site I have seen.

Started reading Aljazeera online after I heard the editor interviewed (on the BBC?). He seemed to espouse excellent journalistic ideas. They have people on the ground all over the world including many in Washington. Hey, I read the right wing conservative & left wing brain dead crazies from the good old USA so why not Ajazeera?

I like this site because it rates anyone who gets their attention. They have been tracking the president’s promises with an Obamameter: It was on this site that I learned that the mosque proposed to be part of the Park51 center near where the World Trade Center was destroyed was indeed a mosque. I also learned what makes a mosque a mosque (prayer 5 times a day).

I’d like to put up more but I have a busy day planned. Onward and upward.