So this brutal week is drawing to a close. Last night was only a five hour rehearsal for the musical, “Beauty and the Beast.”

I sometimes talk to musicians about being on the front or the back of the beat.

This is a very subtle or telling choice that professionals can make.

If you think of the sound of most bebop music, it can give you an idea of how musicians playing on the front of the beat. 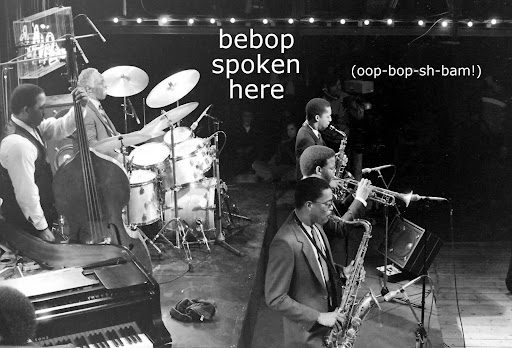 This means with an insistent relentless energy that invigorates every pulse. If you listen to a good funk beat and pay attention to the bass player, they are usually on the back of the beat.

That means an almost resistant funky approach to going on to the next pulse.

These are two obvious examples.

I realized recently that my ballet instructors often like music that is in the center of the beat or the back of the beat.

If I energize the improvisation they often ask me to “slow down.” Sometimes I do vary in my tempos but rarely. Usually this dance talk for playing carefully, insistently, with an emphasis on the upbeat that is almost like a a hesitation (playing on the back of the beat).

String players do this to, especially in small ensembles but also in orchestras.

It is instructive to me to sit down with my violinist and cellist friends each week and have a musical conversation with them as we play piano trio music in which I experience this beautiful understand of rhythm in classical music.

On the other hand, the band director that conducts the Grand Haven High School student pit orchestra often likes to do rhythm on the front of the beat.

This man is a fine conductor and easily the best high school band director I have seen. His conducting is always clear and seems totally intentional. His sense of tempos and style is one I admire and enjoy playing under.

So I find it interesting that I move in one day (yesterday, since I had a trio rehearsal in the afternoon) from the ballet instructors and string players who are often on the back of the beat to playing under a conductor who is often on the front of the beat. I like the variety and challenge of all three situations.

I wasn’t too happy with my behavior yesterday at church. I went to prepare for my string trio rehearsal and discovered that an audio technician had the sound system in pieces and spread all over the music area. I asked him if he or whoever had scheduled him had mentioned the fact that there was a rehearsal on the church calender from noon to two. He said no. I’m afraid I wasn’t very friendly to him even as I as curtly assured him that we would cooperate and he didn’t have to pack up.

After a couple of conversations with my boss and him I figured out that it was more a miscommunication about making Thursday morning or the whole day available for this man’s  work.

In any event he was very cooperative and cleared off an area for us to rehearse in. While we practiced he  took his lunch and then came back and worked quietly while we practiced.  After the strings left I told him he could make noise while I practiced organ.

I felt pretty creepy even though my frustration was a bit justified. I mentioned to the workman that I was the one who introduced the concept of a master calendar to my community and staff. And that the church had grown from the size where you pretty much count on not conflicting when you scheduled something to one where scheduling was more critical.

Before I finished rehearsing I had chatted him up and thanked him. I even gave him a Butterfinger candy bar from the stash in the church office. Oh well, some days I act more mature than others, I guess.

It has been a marathon of a week for me. Next week we begin final rehearsals then end with performances. Next Saturday I have a matinee and an evening performance. Performances are easier than rehearsals. And shorter. As we finished up last night the choral director congratulated the cast and crew that they had taken a six hour show and reduced it to a workable three hours.

Today all I have is a morning ballet class and some tasks around the house to do like bills and maybe grocery shopping and cleaning. Light day.