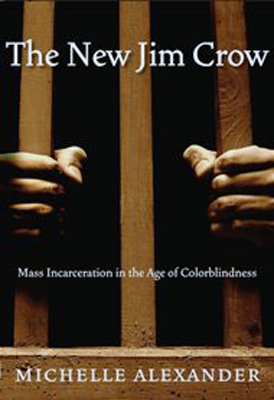 I have now received all the books I recently ordered in a slight binge. I’m reading the library’s copy of Michelle Alexander’s excellent The New Jim Crow. This book is blowing me away. The copy I purchased is a “revised edition.” I’m hoping the main revision was the addition of a foreword by Cornel West. In it, he says The New Jim Crow is “the secular bible for a new social movement in early twenty-first-century America,” “a wake up call in the midst of a long slumber of indifference to the poor and vulnerable.”

I am finding that Alexander outlines the history of racism in the US drawing a disturbing line from slavery to our current system of repression by legal means. She uses copious footnotes citing recent studies, books and a long line of bad court cases.

I was encouraged when I found both Alexander and West making public statements regarding the recent Travon Martin debacle. There are some sane and prophetic voices out there in the midst of the insanity and evil.

The Siege of Krishnapur is the second installment in J.G. Farrell’s Empire Trilogy. I found the first volume Troubles to be both witty and tragic with an amazing use of a decaying Irish resort as a sort of parable of empire. I look forward to the second volume.

The quote comes from Chapter 25 which is nothing more than a series of sentences describing the actions of a bunch of IRS workers sitting in a room. The first few sentences set the tone and rhythm for the chapter: “Irrelevant Chris Fogle turns a page. Howard Campbell turns a page. Ken Wax turns a page. Matt Redgate turns a page. “Groovy” Burce Channing attaches a form to a file.”

The prose is lined up in two columns per page (something lost in the ebook and audiobook version both of which I own). Towards the end of the chapter the title D. T. Max chose for his biography of Wallace simply occurs.

I look forward to reading the bio and hope that he explains his choice of this sentence (which I like).

Mentioned in a footnote in The New Jim Crow. I “liked” it on Facebook along with “Prison Reform Movement,” “All of Us or None,” and “Prison Policy Initiative.”

All of Us or None is”is a group of people with past convictions fighting against the discrimination that prisoners, former prisoners, people convicted of felonies, and our family members face inside and upon release.”

2.Life in a Toxic Country – NYTimes.com

The “toxic country” here is China and the toxicity is the air, baby food, and other stuff. (Elizabeth, scary stuff, but you might be interested that the author uses a British made face mask.)

3. In Missouri, Race Complicates a Transfer to Better Schools – NYTimes.com

The New Jim Crow not limited to mass incarceration.

It’s not until the end of this story that a picture seems to emerge of confusion on the ground when police responded to only the idea that “shots were fired” and did not know if the person they were apprehending had fired shots or not. Tragic stuff.

5. Of Courage and Cantaloupes – NYTimes.com

When will our elected officials begin to govern again?

I thought this was fun and plan to read some books by the other writers in the clan.

8. Court Rulings Blur the Line Between a Spy and a Leaker – NYTimes.com

We now have legal blurring between espionage and reporting. Great.

I have known this was coming for a while. It seems to me to be a poor choice of organ (Cassavant with pipes concealed!), but people with that opinion seem to have lost this one. Too bad.

1 thought on “books in the mail and 9 links”