I am over half way through Kingsley Amis’s romp of a book, The Alterations.  It takes place in a reimagined 1976. The Reformation never happened. The Catholic church has evolved into a very powerful institution. Mozart didn’t die young to be buried in a pauper’s grave, instead he lived long enough to write much more including a second Requiem which features in the opening pages of the book.

Despite the fun alt-future/past, the book is mostly about a young singer who is facing the dubious honor of becoming the best singer that every graced the halls of this imaginary world. All he has to do is get “fixed” and become a castrato.

Unfortunately, this eleven year old protagonist is just waking up to the world of sex.

And as his fellow ignorant student says speaking of a renegade monk who continued to pursue dallying with “unchastity” despite certain death if caught a second time: “This man knew all along the penalty he faced. Perhaps the first time he was rash or indiscreet. Not the second time. He preferred the risk of being pulled to pieces to not fucking. That tells us something, yes? We still don’t truly know what it’s like, but we do know how much he wanted to do it….” 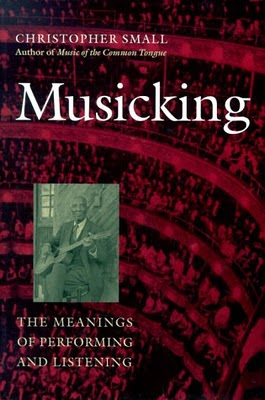 I have also been reading Christopher Small’s enlightening little tome, Musicking: The Meanings of Performing and Listening.

This book helped pull me out of my glumness on vacation. Reflecting on my isolation and much different way of seeing music from other local musicians, my mental and physical fatigue dragged me into some cynical melancholy just before vacation. At first I was interested to reconsider Plato’s cave and understand that Plato also commits the mistake of thinking of music as a thing and not an activity.

I realize that I have thought of music as something to do since the first time I sat down at a piano and began making sounds.

Somehow school did not kill this in me. I think a lot of the credit goes to teachers I had like Ray Ferguson and Malcolm Johns at Wayne State.

Then Small opened my understanding to the idea that the performer or composer is just a part of the entire action of music. Besides listeners, there are dancers, people who make instruments, people who prepare performance areas, in short anyone who contributes to the “musicking.” Small’s ideas enlarge the western concept of music to include all human music making of any kind. This fits me so much better than narrow ideas like academic classical music or popular music in the U.S.A.

Small’s concept is big enough to include these as well. But he is asking some very cool questions. Questions like “What does it mean when this performance of this work takes place at this time, in this place, with these participants?” and “What’s really doing on here?”

These strike me as similar to liturgical questions I have been asking since I listened to a Louie Weil lecture on a tape many years ago in Oscoda Michigan. They are essentially can u buy valium questions that seek more honest understanding than received wisdom allows.

I am consoled that even though I have no living musical community beyond those parishioners who listen and enter in to the “musicking” with me and others, that what I am doing is a basic human activity of making meaning whether I am performing a work composed by others or myself or improvising.

It also helps me understand why I enjoy congregational singing so much even as I struggle with the ideas of believing in a simple religious faith. I enjoyed doing the music at yesterday’s service as usual. It helped to be more rested. I was able to just “do” the music and that was fun. I nailed the William Byrd prelude, “The Carmens Whistle.”  I did the entire set of nine variations on 4′ stops (sounding up an octave). This is logical because keyboard instruments of the time were actually tuned up an octave. This made them smaller and more portable.

I managed to come up with settings that provided an entirely different sound for most of the variations. The sounds were very soft and gentle in places and were probably drowned out by the sounds of the congregation. But I shrug this off and just play.

The choir did a respectable job on S. Drummond Wolf’s 1945 arrangement of the keyboard piece, “The Earl of Salisbury” by William Byrd.  I have loved this little piece of music ever since I heard the Pentangle perform it in the 60s or 70s. I managed to take Drummond’s arrangement and make it a bit more appropriate by dropping his dynamics and doing it faster than his marking of “Andante.”  Choir blended well and made good vowel sounds.

I also nailed the postlude, “Galliard” by Byrd. Ray Ferguson taught me a different one by Byrd which I love. I love the way Byrd (and others in his period) are so subtle with meter shifts and excellent interior part writing.  What I played was essentially a sort of modern organ rendition of a wonderful harpsichord piece. I register it pretty loud. I thought it came off well.

Saving the Lives of Moms – NYTimes.com

Fistulas are terrible holes that persist in women’s abdomens between their rectum and vagina and/or their bladder and vagina. They used to be more wide spread but now are a problem in Africa and Asia.

I love the urologist who originally hailed from Grand Rapids and then decided to make fixing these conditions his life work. He has now fixed more fistulas than any other doctor (according to Kristoff’s article).

“People in America can’t believe I left urology to do this, but this is about changing lives,” which is better than “listening to men tell me about the quality of their erections…”

Alan Lomax recordings are now online (though they seem to be experiencing enough high volume to make accessing them problematic). I was excited to find so many recordings of singing and conversation with Vera Hall whose recordings I have loved for years.

This is my favorite: