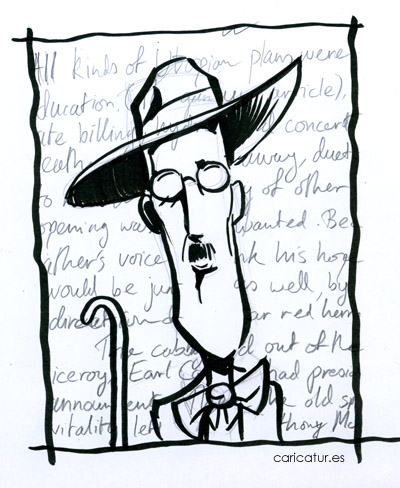 But only Joyce can make a Wake.

Anthony Burgess, Here Comes Everybody: An Introduction to James Joyce for the Ordinary Reader I finished Tenth of December by George Saunders yesterday. It’s been laying around waiting for me to pick it up again. Saunders has the kind of mind that intrigues and entertains. I especially liked the short story, “The Semplica Girl Diaries.”

In it, he has his usual hapless narrator rambling on while the reader tries to figure out in exactly what universe the story is being told. I especially like the way Saunders gradualy introduces the main characters, the Semplica Girls. It’s not until the sixth page of this 60 page short story that they are obliquely alluded to:

In front of house, on sweeping lawn, largest SG arrangement every seen, all in white, white smocks blowing in breeze and Lilly says: Can we go closer?

Leslie, her friend: We can but don’t, usually.

After a few more pages of wondering what “SG” referred to, it occurred to me that they were probably the Semplica Girls of the title. The narrator is the diary writer, however, not the Girls themselves. And his sentences are bumpy constructions as above, often omitting words.

Gradually you learn that the Semplica Girls are imported from foreign countries, have a “microline” that runs through each of their heads that connects and shackles them,  that they are suspended eerily in a supposedly aesthetic arrangement and whose presence in lawns indicates social status even as the owners talk about how having them helps the Girls themselves. They come voluntarily both to escape terrible situations from their own countries and to send money home to their families.

I picked up Saunders to read after Nathan Lane confessed in a New York Times celebrity interview that he had not read Saunders new book yet, but it was on his list of mandatory reading. I can see why. Saunders is just warped enough to help me understand how to live in the future (It IS, in the words of Firesign Theater, a lot like having bees live in your head). I love the quote below put up by Writers Almanac.

After pointing out that Hughes haunted the public library in Lawrence, Kansas, because it was one of the few integrated builds there, Hughes is quoted as saying:

“Then it was that books began to happen to me, and I began to believe in nothing but books and the wonderful world in books where if people suffered, they suffered in beautiful language, not in monosyllables, as we did in Kansas.”

“I began to believe in nothing but books and the wonderful world in books….” I relate.

Joyce is describing his two main characters, HCE and ALP, man and wife, but I think the lovely jokey words apply to the world of books as well. Apparently, today is Joyce’s birthday. At least according to Writers Almanac. I’ll quote a toast from Joyce to celebrate:

And may he be too an intrepidation of our dreams which we foregot at wiking when the morn hath razed our limpalove and the bleakfrost chilled our ravery!

This review is worth reading for its own sake. Although we think we are living at a time of immense change, Gordon insists that the present does not measure up to the Industrial revolution in terms of radical change. History helps.

Richard A. Posner’s ‘Divergent Paths: The Academy and the Judiciary’ – The New York Times

What to do with gifts from the cousins?

I suppose I shouldn’t be surprised that brain dead conservatives have been calling the tune. Nice to see a little loosening up on this stuff.