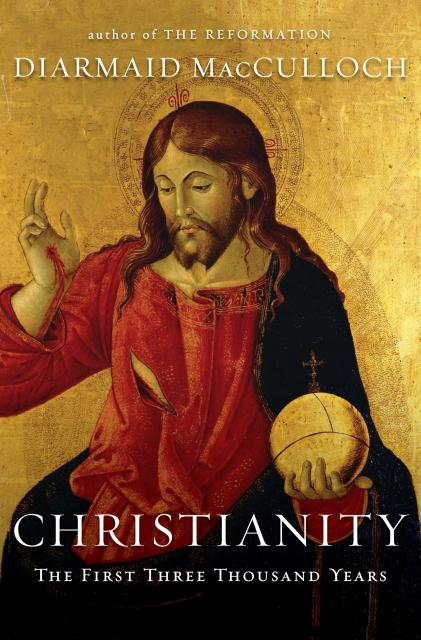 I think I may have found a further reason for purchasing ebook copies of books: simple size. Christianity: The First Three Thousand Years by Diarmaid MacCulloch is a very large book. While on vacation I read MacCulloch’s fascinating review of R. I. Moore’s The War on Heresy:  Faith and power in medieval Europe.

The writing in the review interested me more than the book he was reviewing. I noted that MacCulloch had written a history of Christianity and that the book was sitting back in Holland on Herrick Library’s shelves.

Yesterday I was grabbing a slew of new Christian Romances for my Mom to read. I had a book on hold and grabbed that. It was Michel Houellebecq’s latest English translation The Map and The Territory. Then I remembered the MacCulloch and grabbed it as well. At first I thought I would probably want to own such a large book with copious illustrations and maps. It clocks in at just over a thousand pages. That doesn’t include another 150 pages of critical apparatus (the plural of apparatus is “apparatus” or “apparatuses” sadly not “apparati” as I first typed). I tend to delve into footnotes and bibliographies. In fact I have already ran across another book footnoted by MacCulloch: The English Hymn: A Critical and Historical Study by J. R. Watson published in 1999.

I have done some reading about hymnody. It used to be a major interest of mine. This book might suck me back into thinking about it. We’ll see.

In the meantime, a Kindle copy of the MacCulloch would make it easier to lug around and read.

I’m reading the Kindle version legally loaned to me by Eileen. Just about done. It’s not as bad as I expected it to be. I plan to finish it before attacking Houellebecq.

Why Is Apple Discriminating Against Iranian-Americans? – NYTimes.com

Another reason to avoid Apple if you can.