Finished An Equal Music by Vikram Seth yesterday.  The musical descriptions in the book are quite good. But it occurred to me that the book participates in the snobbery of the music world, denigrating all but the “greatest” music.

This might have worked out better except that the main character, Michael Holmes, is by turns vapid and/or unbelievable. He seems to have no thought of the people that his lover has gathered into her life in the interval in their relationship (which he initiated).

Their relationship seems to be mostly about his own infatuation and needs.

This is not very attractive.

At the same time, Holmes turns his back on what Seth apparently holds out as his eventual salvation, not relationships but the music itself.

If the music in the novel is great (and I believe that it is — “Art of Fugue” by Bach, Trout Quintet of Schubert), how does a musician turn his back on it as Holmes does quitting the quartet because he cannot play “The Art of Fugue” now that he knows his estranged deaf lover will be performing it.

I think this is weak. It discounts (at least temporarily in the plot) what the author purports to be espousing —- that great art is as good as living. Holmes has also spent his career playing a very fine violin on loan to him. This seems like a precarious way to proceed, very “student”-like to me. Surprise, surprise, there is a plot crisis where it seems he will lose his violin (he doesn’t).

Reading reviews of the book I found that Seth’s partner at one time was a violinist. I couldn’t help but wonder if the main character in this book was a way for Seth to parade both his love and detestation for his previous partner.

Certainly, musicians can be detestable (being humans). But there are some interesting people in the book — the violist in the string quartet who is a sister to the first violinist.

Her intriguing three-dimensional personality is begging for more details for the reader as is the cellist. Billy (the cellist) is both more conventional than his cohorts and more adventuresome. They reluctantly agree to play his compositions knowing in advance it will fall short of their snobbish small definition of music.

I find this unattractive. I believe that music grows easily out of maturity and relationships. I know that it’s not the only way that it works. But I have known enough very excellent musicians who were both exemplary human beings I strive to emulate and very very fine musicians.  I agree with Chet Atkins who said that he could tell a lot about a person by the way they play their instrument. I have found that to be so and usually use it as  an important way to understand another musician both as a person and a musician.

Although the music is great in the book and Seth makes it clear that the deaf pianist lover makes wonderful music when she plays, the whole thing rings a bit false for me. I wonder what sounds Seth imagines for her, the quartet and Holmes himself playing the second part alone to one of the fugues from the “Art of Fugue” at the grave of his benefactor who wills him his instrument at the last minute. 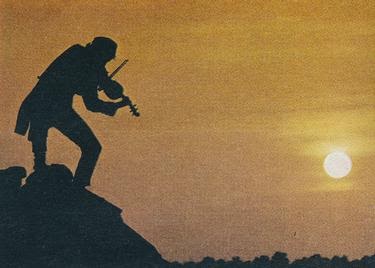 I suspect that Seth’s imagination would not be quite matched by any real realization of such narrow musicians playing music even though they are obviously excellent players.

I found myself wondering what kind of music the cellist wrote.

But there you are. This from the dude interested in composition (me).