Finished The English Hymn: A Critical and Historical Study by J. R. Watson yesterday morning. This morning I optimistically began reading the collection of essays that is volume one of The Hymnal 1982 Companion. I consult regularly in this four volume work which I have owned since it was published and read many of the essays and entries in it. It would be good for me to read this volume straight through. Not sure I’ll continue, but it seemed the way to go this morning.

By the Book: Michael Chabon

In the Sunday NYT Book Review, Michael Chabon mentioned an author I have never heard of, Edward St. Aubyn. I poked around on Amazon, library web sites and such. It looks like a good read. One of the reader reviews on Amazon said that it despite it being a “brutal read,” he/she continued to be sucked in. Read the first few pages and decided I would like to get a copy. An interlibrary loan request was denied. It’s $9.99 on kindle. That’s probably what I’ll end up doing, since the used copies are even more expensive. 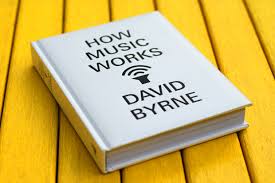 In the meantime, I have added How Music Works by Byrne to my morning reading. I like his dry formal/informal voice which comes through nicely to me in his prose. It’s like having a conversation with a goofy educated experienced pop musician who exhibits both insight and naivete. I’m going for the insights. 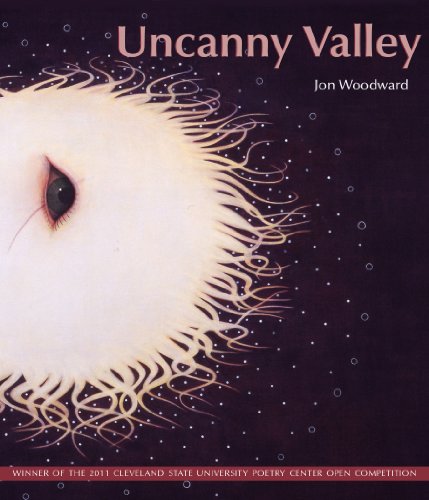 This evening Eileen and I have been invited to have supper with our friends, Rhonda and Mark Edgington, Jon Woodward the author of this book of poetry and Oni Buchanan, the musician who will be accompanying him as he reads. They are performing a setting by composer, John Gibson. Rhonda knows Oni, I believe. They are both represented by Ariel Artists anyway.

Here’s a link to a page about the work with an embedded audio excerpt. 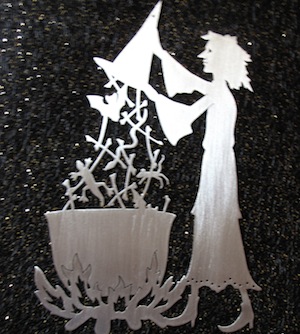 I received an email from my friends Dave Barber and Paul Wizynajtys, yesterday.

These are two talented men whose friendship I have valued over the years and art I have long admired. I wish they would use the interwebs to sell their art. They fear copyright infringement or people just plain stealing their designs which are wonderful and unique.  They limit their marketing to personal appearances at art fairs and stocking their wares in art galleries. I think if they showed their wares online, they would make  a ton of money.

Anyway, the email said that Dave’s Halloween ornaments were currently available at Mackerel Sky Gallery in East Lansing.  Since the gallery had put the above image on their web site I assume that Dave has given his permission to so. I put up a link on Facebook and he thanked me in a comment.

Daughter Sarah (Hi Sarah) asked for more pictures and an online purchasing option. I would like that as well and would instantly buy something.

Haven’t had time to include links recently. The list is long today as a result.

Quentin Tarantino Tackles Old Dixie by Way of the Old West (by Way of Italy) – NYTimes.com

O.J. Simpson, Racial Utopia and the Moment That Inspired My Novel – NYTimes.com

Heard James Meridith on the radio about this. He and others have problems with this commemoration. It does seem questionable to commemorate something that was forced down the throat of a university ostensibly founded to perpetuate white supremacy.

Who Controls the Story? – NYTimes.com

How to Help Iran Build a Bomb – NYTimes.com

Attack it. That should calm things down.

Kill the Indians, Then Copy Them – NYTimes.com

Fascinated when I looked up the word, “deracinated,” used in this article. It’s not “race” as in human race, it’s “race” as in “racine” French for root, hence the meaning is to uproot.

What I Learned From Debate Prep – NYTimes.com

Received an email from a friend of a friend who is affected by this. Her husband has long suffered from erratic behavior. Now he is in advanced alzheimers. It turns out his condition has been caused by exposure to toxic chemicals when he was in the service.

This (is) happening now. I have copied parts of an email from someone who is desperately in need of this bill (HB NO: 2052 AKA The Fort McClellan Health Registry Act) to pass. Please act and pass on.

“The CHAIRMAN of this Congressional Committee is Rep. Jeff Miller, from the Pensacola/Fort Walton area in Florida. HIS PHONE NUMBER IN WASHINGTON: 202-225-4136

Congress will be in session next week from Oct. 1-5 before adjourning until after the Nov. election. I called this office the other day – a very friendly young woman named Noel answered the phone. My call took only moments.

You can just say that you know that Congressman Miller is the CHAIRMAN of the Veterans Affairs Committee in the House of Representatives, and that you want to URGE him to pass House Bill NO: 2052 – AKA The Fort McClellan Health Registry Act – because you know someone whose life has been destroyed by toxic chemical exposure at Fort McClellan.

I’m contacting everyone I can think of – I figure that if Mr. Miller’s office is deluged with calls about this that he will take notice!

Why Obamacare is a Conservative’s Dream – NYTimes.com

Away From Cities, a Life Laced With Violence for Syrians – NYTimes.com

Reporting from Syria improves. What a mess.

One thought on “book and art talk”