It’s a rainy day in Western Michigan USA.  My violinist was ill yesterday so the trio didn’t rehearse. I spent the extra time practicing organ and meeting with my boss a bit earlier (as per her request). She seemed a bit stressed. Being a priest or a minister can be quite stressful. I tried to cut our meeting a bit short so she would have more time for herself.

I walked home from church and played through the first three Beethoven piano sonatas.

Ahhh. I told Eileen over supper last night that I imagined finding a little cell phone tree on the walk sprouted from the cell phone I lost last fall. She said I should put that in the blog. So there it is.

I read a short story called “Between Here and There” by Amy Bloom online that begins:

“I had always planned to kill my father.”

It’s a great story. Here’s the link but I had to register on the site to read the whole thing. It’s free if you register. I think this story is worth it.

I have noticed that one of the stories our society tells is about the Bad Dad. Men ARE scum, I know. And Dads often act badly (This is certainly amusingly true in Amy Bloom’s story). But it is also a bit of stereotype. Just my hubris-filled opinion.

I changed my phrase to “hubris-filled opinion” because a dear friend pointed out that I had hubris to suggest that a writer that so many people liked wrote poorly. I won’t repeat that particular piece of hubris, but will take note that I am splashing hubris about here occasionally.

I ran across this wonderful paragraph in “Identity Anecdotes” by Meaghan Morris: [WARNING: PROSE PACKED WITH IDEAS AND WORDS FOLLOWS]

” I have always disliked the term ‘culture wars’, not because the martial image is melodramatic but because the phrase so successfully lent a fuzzy, pluralistic alibi to a hard-edged ideology war, waged over two decades or more, to attach credibility (our beliefs about other people’s beliefs) to neo-liberal ideas of the common social and economic good, thereby securing recognition value (effective ‘interpellation’) for ruthlessly limited ways of imagining the actual and the possible. Now that the dust of the culture wars has packed down into the iron-hard ground of military globalization, on which the violence of terrorism and ‘war against terror’ supports a spreading militarization of civic everyday life, it is obvious that the former rhetorically prepared for the latter; ten years before the destruction of the World Trade Center, President George Bush Snr warned Americans that ‘political extremists roam the land…setting citizens against one another on the basis of their class or race’, urging them to ‘join in common cause without having to surrender their identities’. [excerpt from a speech at the University of Michigan, May 4, 1991 in Beyond PC: Towards a Politics of Understanding [link to Google books] . As the word spread, in the blink of a cursor it became commonplace in Australia, too, to hear talk of feminist and ‘multiculturalist’ terrorists not only on campus but in government as well, and to meet passionately angry citizens, colleagues and family members for whom the term terrorist worked as an objective correlative of their feelings about seemingly endless criticism of their values and ways of life (‘of course, I don’t mean you, dear).

What a great piece of writing! I especially like “fuzzy, pluralistic alibi to a hard-edged ideology.”  I do sometimes wonder if there is an outburst of people in the USA (Morris is an Australian living and teaching in Hong Kong) who substitute “ideology” for thinking. There certainly seems to be “hard-edged” ideology afloat these days and I’m not just thinking of the militia types or the liberals.

I also like that she defines credibility as “our beliefs about other people’s beliefs.” I have had heard several different people in different contexts talking about “most people” this and that. Each time I have spoken up and gently disagreed (much to my own later chagrin… why? why? why can’t I keep me bloody trap shut? Is it a Bad Dad thing?).

I was just speculating yesterday about my own lack of credibility locally. I am thinking musically and the explanations are convoluted and probably boring, but I still winced last night when two music profs came in to the pub and greeted me as I was tucking into my third martini and visiting with my lovely wife over supper.  I think they think I’m a hack. I also think they are probably fucking right and am tired of trying to talk to other people about their beliefs about my beliefs. Fuck the duck. I am a happy hack, if nothing else. Thank you St. Beethoven. 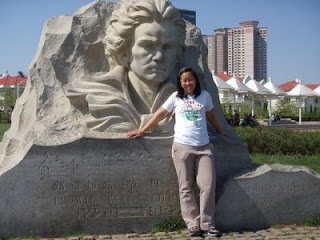 Bloom’s comments on terrorists reminded me of a facebook friend who was really bent out of shape because a “terrorist” was being elected president. I had to respond. You know, whatever else he is, Obama is not a terrorist. Honest.

I wish I had known Bloom’s lovely phrase “Of course, I don’t mean you, dear” earlier. I think it might come in handy for me since I am such a pompous hypocrite sometimes. (Come to think of it, maybe I am the Bad Dad, heh).

Well I’m planning on doing some serious goofing off today. Maybe walking in the rain and planting myself in the coffee shop with a book or the computer. I should call my Mom and offer to drive her to a restaurant for lunch (she always buys). I try to get her out once a week and have already offered once this week, but her tummy wasn’t doing so good.