I seem to be playing my way through Bach’s “Art of Fugue.” I am using the edition above by Beethoven’s teacher, Carl Czerny. For years I have studied this work in score, which is the way that Bach wrote it out.  My edition of the score has a keyboard reduction underneath but it is very very small.

By writing these 14 fugues in score it’s not clear how or if Bach intended this music to be done by any particular instruments. It is often played in arrangements for many different kinds of ensembles.

I have also played movements on the organ. I long wanted a larger clean keyboard version, but the most up to date edition was over $40.00 and I kept telling myself I could just make an edition from the scores myself.

Finally I broke down and bought the lousy edition by Czerny. I say lousy because many 19th century editors brought their musical sensibilities to any music they edited. So while Bach never wrote a crescendo sign

or a long slur,

Czerny clutters his edition with superfluous markings.  If you look below at the first page you see a great deal that is not Bach but Czerny (Andante Con Moto, sempre legato and the “P” sign, none of which Bach wrote just in the first measure).

The many volume edition of Scarlatti’s Ezzercisi I bought from my teacher, Craig Cramer, is the same way. When playing these editions, one has to remind one’s self constantly to ignore the markings and just look at the notes since that’s all the composer actually wrote.

I find this most difficult to do with articulations (accents and staccato markings especially) because I automatically follow them.

Anyway, having played all the way through many different works like Bach’s Well Tempered Clavichord and Haydn’s piano sonatas, I realized that I was doing the same thing with the “Art of Fugue’ now that I have Czerny’s edition laying around. I’m all the way the fourteenth fugue.

These works are an encylopedic working out of a beautiful melody. The melody of a fugue as it is stated for the first time is called the “subject.”

Here’s a link to free mp3s of Chris Breemer playing all the movements.

On Tuesday morning, as the ballet teacher came in the room, I was playing a suite movement by Bach on the piano (the prelude from the G minor English Suite). The movement is in 3/8 and I was playing it through a bit slowly for accuracy’s sake even though I have learned and performed this piece many times.

She began dancing and talking about how the music would make a nice dance. I pointed out that I was playing it under tempo. We then had a discussion of how 17th and 18th century musicians and dancers thought about tempo and the relationship of one dance to another.

She then proceeded to give the class a short lecture on the historic origins of ballet in the French court emphasizing the baroque nature of the dance. I thought it might be nice to play a little Bach for their first exercise, so I quickly scanned the Minuet II from the F Major French Suite of Bach. By scanning I mean that I made sure that it fell evenly into four measure phrases.

I began playing by sketching out Bach’s melody and making it more simple so that it could be easily perceived by dancers. This seemed to work okay but was a little complicated in places where Bach like any good composer avoided obvious groupings of the melody and made it more subtle.

The teacher mentioned to the class that they were getting authentic baroque music for their dance today. Then she said that she loved using Sarabandes for dancing and said that she preferred the melancholy minor ones.  I started flipping through trying to find one.

I did find one and used it for the next exercise. Unfortunately, she had not been asking me to do one, just telling me and the class how much she liked them. She walked over to the piano and said we were going to have to dispense with Baroque music for the day.

She was extremely gracious (as all the teachers I have worked with have been) and I told her it was no problem and immediately began improvising more appropriate music.

It is so much easier to improvise music that I can tailer and alter to the needs of the moment.  But Bach is pretty wonderful even if he is complex.

I am thinking this morning I will take the music of Louie Couperin along in case this same teacher calls for a melancholy Sarabande to dance to.  Uncle Louie (as I refer to him since he is the uncle of the more famous  Francois Couperin) makes beautiful little dance movements that seem a bit more simple in their structure.  I say it that way because they are ever bit as elegant as Bach’s suite movements and even more subtle in places in their simplicity. It’s great music I have been playing for decades. It makes me want to get back to work on the harpsichord. 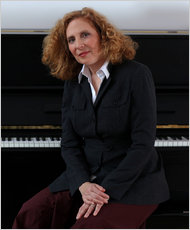 Post-Minimalism and Folk Ballads Fuel a Composer  ALLAN KOZINN on composer and Bang on a Can founder, Julia Wolfe.

Most of today’s links are articles I haven’t read yet.

Lorraine Adams on The Truth Behind the Headlines | FiveBooks | The Browser

Princeton educated Lorraine Adams was a staff writer for The Washington Post for 11 years and won a Pulitzer Prize for investigative reporting. She is the author of Harbor, a novel about the experience of young Arab Americans, and more recently The Room and the Chair, a book that deals with US newsrooms, cockpits over Afghanistan, intelligence headquarters and the way the truth about violence can be manipulated, glossed over and forgotten. In a democracy, she says, you can’t go to war when the public has been so unreliably informed by the media and will poll accordingly.

Barnett and Foley: The Nuts and Bolts of the ObamaCare Ruling – WSJ.com

It is a common phenomenon that we see the bias we disagree with and are blind to the bias we agree with. I find many op-ed articles in the Wall Street Journal speak from a very different point of view than I have. This article begins by labeling progressives who don’t take challenges to the health care law seriously as “smug” thus performing a neat ad hominem one-two punch: people the authors disagree with are stupid AND also smug in their ill-conceived understanding. FWIW, I think it’s very likely the Supreme Court will rule against this law.  But I guess I am smug. Heh.

These two writers are worth reading. I plan to read their article even though it starts the way it does.  A quick Google reveals that Barnett is a libertarian and Foley a bio-ethics expert. They are both highly educated and articulate. What more could you want from a conservative when you are a smug progressive? Heh.

Anyway, I make it a point to read and listen to the most coherent people that I disagree with.

Amira Bennison on Science and Islam | FiveBooks | The Browser

For Lakoff, language is not a neutral system of communication…

Why Julian Assange Hates the ‘New York Times’ | The Nation

So what sparked the rift with Assange?

For one thing, Assange was upset that the Times refused to link directly to the WikiLeaks site. Then there was a shaky profile last summer..

1 thought on “back to bach”