Eileen just left for work. I got up and made fancy brown rice and blueberry muffins this morning.

Neither was ready for Eileen’s and my breakfast. I re-attacked Neil Stephenson’s novel “Anathem.” There is really a lot of word play in it. He invents a situation which preserves the  surface features of monastic Christianity but situates it in a fantasy world where Saints are not Saints, but Saunts. Saunts are revered people from the past. But not necessarily holy. Saunt from Savant? There are “concents” instead of “convents.” “Upsights” instead of “insights.” Fraa and Suur instead of Brother and Sister as honorific titles. I had decided to have another whack at this book despite the lingo, when yesterday I was sitting and waiting for my Mom and Eileen at a new local restaurant we are getting to like. When I discovered there was a glossary in the back. Ok. That will help.

I grocery shopped, had lunch with ladies, did Eileen’s and my bills, did my Mom’s bills, dropped off stuff to the post office and then went and practiced organ. 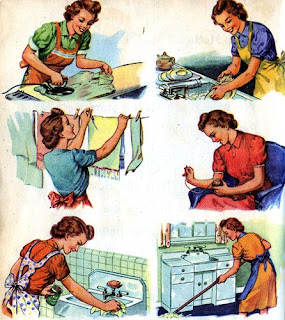 I also got a little bit of piano practice in there.

Today I need to solidify plans for an upcoming choral recital. Oy.

News is depressing these days.

Here are some stories I have been reading:

[link to] “Firm to Remove Bible References From Gun Sights” – NYTimes.com This religious Michigan firm that makes gun sights is getting heat because they put little Biblical references on their sights. Admittedly a dopey practice. But this preceded their military contract. Now they are the scapegoats. Although Christians drive me nuts, I say caveat emptor.

[link to] “To Heal Haiti, Look to History Not Nature” in which Mark Danier does some educating about the history of Haiti. Surprise, surprise. The US has done its share of screwing up this country. Not to mention the fact that when the old white bosses were killed or driven out of the country, new bosses emerged to continuing exploiting the general population.

In [link to] “Some Frank Talk About Haiti” , Nicholas D. Kristof explodes some myths and gives some more sad facts.

I continue to find New York Times coverage interesting and informative. I won’t have any problem paying for this service when they start charging next year. In fact, I have already tried to pay for it. But that’s another story.