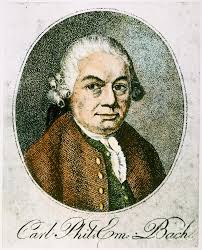 I was surprised yesterday when I read that CPE Bach (Johann Sebastian’s sons) composed many of his piano sonatas as a young man under the watchful eye of his father. I know that JS Bach was aware of the turn of music to the clearer and lighter pre-gallant music style. You can even see this in some of his works as he occasionally steps away from counterpoint and introduces beautiful homophonic based melodies.

I own five volumes of CPE’s keyboard sonatas (I guess its six counting the organ book I just bought). 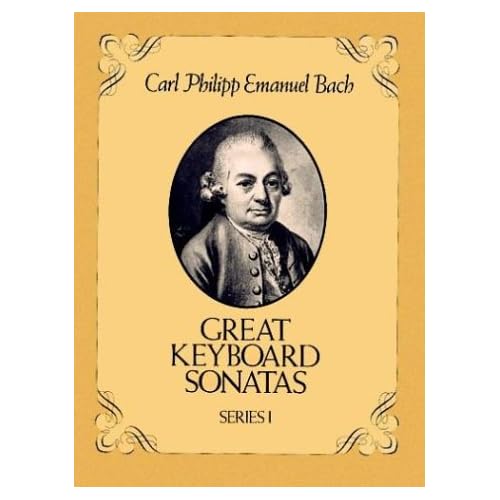 Two of these are the Dover collections. 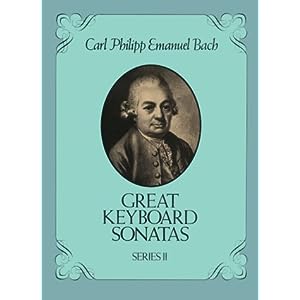 Like all Dover books these are reprints of older editions. The sonatas have been rearranged chronologically. They are drawn from Le Trésor des pianistes (volumes XII and XIII) by Aristide and Louis Farrenc (1861-1874).

The first volume is mostly of sonatas written before the death of his father. Yesterday I played five of CPE’s six so called “Prussian Sonatas.”

It fascinates me to think of father and son composing away in such wonderful yet different compositional voices.

I have three volumes edited by Eiji Hashimoto.

I compared these more scholarly editions by Hashimoto to the first volume of my Dover CPE and found no overlap. This is a lot of music. When I purchased the Hashimoto editions, I’m sure I played through most of this material.

CPE is an important figure in music if for no other reason than his wonderful Essay on the True Art of Playing Keyboard Instruments. In this volume he is quite articulate about how music should be performed on keyboards. He does talk about his father. It’s not always clear how applicable all his comments are since they are sometimes vague or seemingly contradictory.

I remember when I first read this book thinking about the fact that I was pretty sure Glenn Gould read this. Gould’s interpretations are hardly in the historical fashion. But I do see influence of sources like CPE’s rather lengthy tome on his interpretation.

The Langlais edition of the organ sonatas I purchased is not that scholarly. But it is a practical performing edition and I am finding the music quite delightful.

I’m learning a movement to perform this Sunday as the prelude.

The”Prussian” sonatas I played through yesterday are dedicated to Frederick the Great who was CPE’s boss and was himself a flute player.

Published in 1740 the year Frederick ascended to the throne of Prussia, they appear two year after CPE had arrived in Berlin to join the august company of musicians in the young Frederick’s court.

Here’s a famous painting done in 1857 (many years later) of Frederick playing with his musicians. CPE is seated at the harpsichord. He had arrived two years earlier as I say to join Quantz, CH and JG Graun, Franz and Johann Benda. All these men were name brand musicians at the time. Quantz and/or the Grauns probably got him the gig. He was young and had only the Bach name going for him. I mean besides his considerable talent which I like to speculate he began to display in the lovely “Prussian” sonata group published a couple years later.

An interesting note from The New Grove Bach Family indicates that the young CPE was not paid as much as his confreres. “A budget list of 1744-5 in Frederick’s hand shows … 300 thalers (for CPE), as against 2000 each for Quantz and CH Graun, 1200 for JG Graun, and 800 for Franz Benda.”

The New Grove Bach Family goes on to point out that “In the same, season, the leading castrato received 3000 thalers.”

The castrati were the Justin Biebers of the time.