I received two books from the library inter loan service yesterday. Their contrast is striking to me. 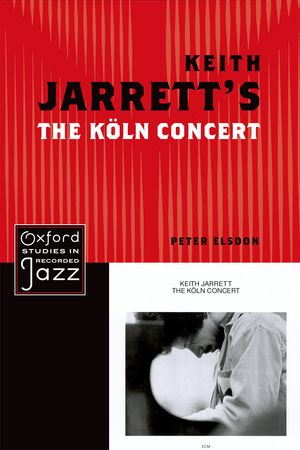 The first of these is Peter Elsdon’s book on one of my favorite pieces of music, Keith Jarrett’s Köln concert.

I was noticing this morning that this book situates Jarrett in the Jazz category. Jazz and classical music are probably two categories of thinking about contemporary music that have lost most of their usefulness for me. It is in just these two categories that my two books seem to situate themselves.

I have long thought of Jarrett as a composer and improviser who began his career in the last gasps of a distinctly historical separated genre of Jazz (with Miles Davis) and continues to this day to make very interesting music that defies (in my mind) simplistic categorization.

In 1976, Jarrett released some astonishing music on an album called “Arbour Zena.” Dedicated to his “teachers,” it is basically a concerto for Jazz trio and orchestra. It’s beauty is compelling and has none of the clumsiness so often heard in early blends of musics.

If you’ve never head it and like music at all I recommend clicking on the YouTube video to get a taste.

In the previous year he released the Köln concert recordings. In this he improvises for over an hour. I find this music equally astonishing.

For a taste click on this video and listen a bit.

In glancing through Elsdon’s little book, I immediately noticed that it contains what I hoped for: a detailed musical discussion of this piece. I saw many transcriptions which led me to look more closely and discover that in 1991 Jarrett gave permission to and cooperation with Yukiko Kishinami and Kunihiko Yamashita to transcribe the entire concert. Wow. I will be investigating this further and probably purchase both it and Elsdon’s book.

The second book that came for me yesterday was The Classical Revolution: Thoughts on New Music in the 21st Century by John Borstlap. It is a grumpy insular look at music from a disgruntled classical musician’s point of view. I was unhappy to read that Bortslap thinks that John Cage was not a composer and that Duchamp was not an artist. That gives you an idea of his aesthetic which largely rejects latter 20th century music that dominated the universities (Schoenberg and his ilk).

Borstlap himself like many classically trained musicians and composers (myself included) has suffered at the hands of this insular and narrow academic approach to music. Reading his struggle is interesting. At the end of the book he has section called “Some Composers.” Although I already know that Borstlap and I will disagree about much I was excited to see that I didn’t recognize one of these composers. New people to check out! Cool beans.